×
Go to content
Greece is a small country with a population of 10.7 million people, but its international situation is quite complex.
Nowadays, it is gradually recovering from the severe economic crisis started in 2009. Its causes are the result of a combination of the credit crunch that followed the global financial shock of 2007-2008 and of unwise economic policies based on excessive expenditures that resulted in high levels of indebtment. To avoid bankruptcy, Greece had to accept several bailout plans demanding it to implement strict austerity measures (reduction of government expenditures, privatizations, downsizing of the public sector); but this resulted in a sensible economic contraction (26% GDP loss in 2013, compared to 2007 levels).
These harsh policies, while necessary in economic terms, had a tough impact on the population which caused a widespread anti-EU sentiment as well as violent protests and social turmoil; thus straining the country's relation with the European Union. To add further problems, the immigration crisis started in the wake of the war in Syria put further pressure on Greece in both economic and social terms, due to a considerable flow of refugees from the conflict zones. Now the situation is slowly improving, but it remains troubling.
At the international level, apart from the disagreements with the EU and some of its member states (notably Germany) over the debt crisis, Greece is involved in various disputes. One revolves around Northern Epirus, located in Albania but inhabited by a significant Greek minority. Yet, bilateral relations have greatly improved in recent years. Another longstanding dispute revolved around the use of the name 'Macedonia' by the Former Yugoslav Republic of Macedonia (FYROM) and its claim of being the modern inheritor of the ancient Kingdom of Macedonia. Greece considered that the cultural legacy of Alexander's Empire is part of its history and rejected the use of this name. After long negotiations the two parts reached a deal (approved in early 2019) according to which the FYROM, that in the meanwhile has dropped most of its claims on the legacy of Alexander, has been renamed North Macedonia. However, many Greeks opposed the agreement.
But with no doubt the most troublesome situation is with Turkey. Even though they are both members of NATO, their bilateral relations remain tense due to a series of issues. Apart from a centuries-long historical rivalry, the most important matters are maritime disputes, the frequent violations of Greece’s airspace and territorial waters by the Turkish military, Athens’ opposition to Ankara joining the EU, and the Cyprus question. The island, an independent state having close political and cultural ties with Greece that also hosts an important Turkish minority, is de facto divided in two. Following a military operation in 1974, Turkey occupied the northern part and established there a puppet state called Turkish Republic of Northern Cyprus. The dispute also has an economic dimension, since controlling Cyprus also allows to advance claims on various hydrocarbon fields in the Eastern Mediterranean. The difficult relations with Turkey are largely the reason why Greece maintains a relatively high military budget, being among the few NATO countries spending the required 2% of GDP on defence. As such, the Greek Armed Forces remain a quite powerful military force; even though the recent economic crisis has hampered the modernization program.
Being located at the southernmost tip of the Balkans and being close to the Black Sea and the Middle East, Greece attracts the attention of foreign powers as well. Through NATO, Greece maintains close relations with the United States, who has a military base in Crete. Russia also has interests in the country: apart from long-standing historical ties based upon the common Orthodox faith and shared interests, Moscow plans to build a pipeline passing through Greece. Finally China, who considers Greece as the gate to the EU in the context of its ambitious 'One Belt, One Road' (OBOR) initiative aimed at connecting Europe and the Far East, is making significant investments in the country, especially in infrastructures.
On its part, Greece has interests in the Eastern Mediterranean due to security and economic reasons (namely hydrocarbon exploitation, a relevant issue considering the country’s lack of energy resources) and in the Balkans, and in spite of the recent difficulties it remains an important investor in both areas. Greece also plays a significant role in maritime trade, having one of the biggest merchant fleets in the world.
As such, after the severe economic recession and the social troubles it experienced, the situation is improving. Much remains to be done before the situation comes back to pre-crisis level; but a rebound is possible, and the international context offers opportunities in this sense. However, Greece needs to carefully manage the situation to ensure a firm recovery while avoiding a new stagnation or excessive dependence from foreign countries in financial and political terms.
Post-Crisis Greece: Opportunities & Challenges 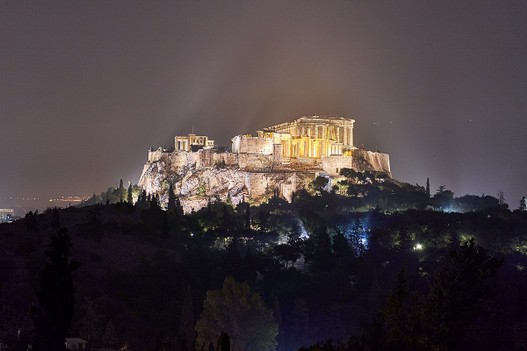 Greece is just recovering from a severe economic recession, and it will take several years to consolidate economic growth and return to pre-crisis levels. Now that the worst seems over, various opportunities open up for Greece.
The degree to which it will be able to manage this combination of challenges and occasions will determine its course in the decades ahead.
This video by KJ Reports, based on my research, explores Greece's long history of debt problems, the recent crisis and the opportunities for the future.
Photo credit: The Acropolis of Athens at night from the Pnyx on October 30, 2019.jpg, George E. Koronaios, publishe dunder Creative Commons Attribution-Share Alike 4.0 International.
Back to content