×
Go to content
India faces an extraordinary combination of opportunities and challenges.
It is 'the world's largest democracy' in terms of population, and is organized as a federation. The states composing it generally reflect the numerous ethnic groups living India. The main religion is Hinduism, but the north hosts a consistent Muslim minority representing about 14% of the total population. Many indians live in the fertile northern plains in what is called the 'Hindi Belt', due to the fact that Hindi is the main language spoken there.
India's economy is rapidly expanding and is the third in the world in terms of Purchasing Power Parity. The service sector is thriving, but manufacturing is also developing and some Indian firms are important international players. India is also investing abroad and is putting considerable efforts to develop its high-tech sector. In this regard, many Indian scientists are world-class researchers, and the country is running its own space programme. The population is large, young and in rapid growth; providing the country with a huge workforce pool. Having an easy access to the Indian Ocean, India is in a favourable position along the lucrative maritime trade routes between Europe and East Asia and wants to exploit the sea to expand its influence abroad. It also benefits from a positive international image as a peaceful, tolerant and non-aligned country, all values inspired by Gandhi which India inherited from the period of its struggle for independence. Yet, it also resorted to military measures several times in the past.
At the same time, it must face huge challenges. Despite the economic development, huge portions of the population still live in poverty and are not litterate. The primary sector is still too large, with many working just for subsistence. Infrastructures are still insufficient, and there are sensible differences in terms of regional development. In particular, the disequilibrium between the rich south and the more populated but pooorer north is problematic. More in general, economic inequality is very marked. Another problematic issue is the complex cast system that characterizes India's society. India is also very vulnerable to climate change, whose effects could have a major negative impact in economic and humanitarian terms. Armed rebels like the Maoist-inspired Naxalites are active in many areas. Hindu nationalism is on the rise since the BJP Party took power in 2014; something that may create domestic tensions with the Muslim minority and with Pakistan, which considers itself the protector of Islam in South Asia and is India's traditional rival.
This raises the security dimension. India is modernizing its military and has a quite powerful navy, a vast army and a small but non-negligible nuclear arsenal; but much work remains to be done. Today, India has two main security concerns.
The first is Pakistan. The two countries have a longstanding territorial dispute over Jammu & Kashmir that sometimes causes border clashes. This raises the risk of escalation, which could have catastrophic effects considering that both powers have nuclear weapons.
The second is China. Despite the formidable defense provided by the Himalaya, India worries about a war with the PRC, who is globally superior. Again, the two powers are involved in several territorial disputed, notably over the Aksai Chin (ruled by China) and Arunachal Pradesh (under Indian control). Moreover, China is Pakistan's closest ally. India is also worried about Beijing's 'One Belt, One Road' (OBOR) project, which it considers as a Chinese attempt to encircle India's territory. It is clear that a conflict between India and China would be equally dangerous, as it could again escalate to a nuclear war. This concern over the PRC has prompted India to seek closer ties with other powers, notably the US, Australia and Japan in the context of the Quadtrilateral Security Dialogue.
In short, India has a huge potential and is becoming an important great power, but to continue its rise it must carefully manage the numerous challenges it is facing.
India’s Water Crisis: Beyond Chennai 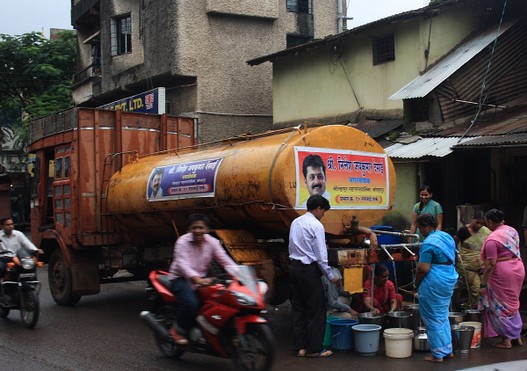 India is one of the world’s fastest-growing economies and it is projected to reach the great power status in the coming decades.
Yet, its road to international prominence is paved with several challenges that it must overcome to achieve its aspirations.
Among them, ensuring adequate water supply to its huge and continuously-expanding population is one of most important.
This problem – epitomized by the Chennai water crisis – is a real threat to India’s rise; as they may undermine its economic development and even spark domestic and international conflicts alike.
Check my article on Geopolitical Monitor (subscription required) at this link.
Photo credits: WaterTruckCropped.JPG, Arne Hückelheim, published under Creative Commons Attribution-Share Alike 3.0 Unported.
Narendra Modi: Overview and Challenges 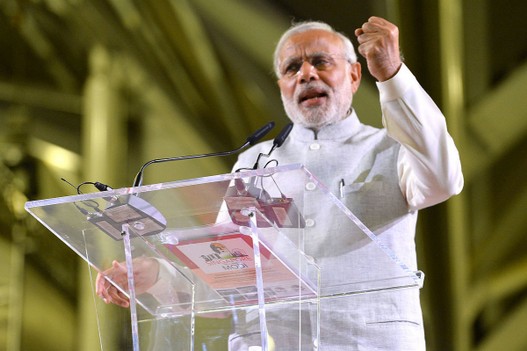 After a long electoral process which lasted more than one month, the BJP Party led by incumbent Prime Minister Narendra Modi has once again emerged victorious in India’s parliamentary elections.
As such, Modi will continue to guide India for another five-years term that coincides with a delicate moment for the country’s rise. Modi will have to face various challenges, and his decisions will leave a lasting mark on India.
Watch my contribution to KJ Reports.
Photo credits: Prime Minister Narendra Modi Narendra Modi in Singapore (23795890516).jpg, Prime Minister's Office, Government of India, published under the Government Open Data License - India (GODL).
The Latest Escalation in the India-Pakistan Conflict

In late February 2018, India and Pakistan faced each other in the worst crisis in decades.
As in the past, the main object of contention was the disputed region of Kashmir. Considering that both powers possess nuclear weapons, such high levels of tensions raise fears of a military escalation in South Asia, which would have detrimental consequences for international stability.
And in the crisis' aftermath, who was the perceived winner?
Learn more about this by checking my contribution to KJ Reports here.
Photo credit: india pakistan flag-off, Garima, published under Creative Commons Attribution-NonCommercial-NoDerivs 2.0 Generic (CC BY-NC-ND 2.0).
India - Saudi Arabia Relations: The Roles of Pakistan and Iran 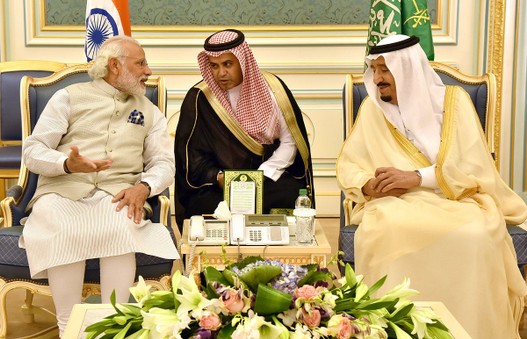 As it struggles to diversify its economy and to find new international partners, Saudi Arabia is looking at South Asia with growing interest, but improving ties with India and Pakistan is not a simple task due to the longstanding rivalry between the two.
Adding Iran to the equations makes things even more complex, and if the current trend persists there will be little space for greater Saudi-Indian cooperation.
Click here and check my latest contribution to KJ Reports to know more.
Photo credit: Prime Minister Narendra Modi in conversation with King Salman bin Abdul Aziz Al Saud of Saudi Arabia.jpg, Prime Minister's Office (India), published under the Government Open Data License - India (GODL).
Can India Actually Become a Global Power? 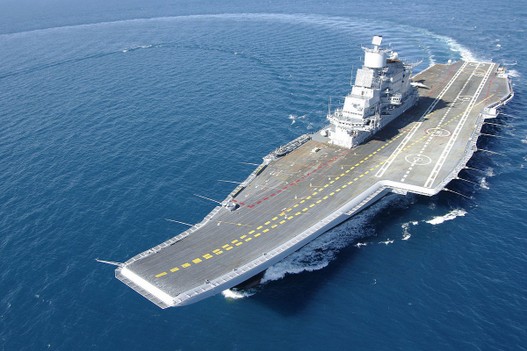 In today's world, India is an important rising power in economic, political and military terms.
At the same time, it has to face several challenges on both the domestic and the international level, and its ability to cope with them will determine the role it will play in the 21st century.
The YouTube channel KJ Reports asked me to write an overview on this fascinating country and they created a video based on it.
Watch and learn more about today's India, the foundations of its power, the challenges it must face and its geopolitical situation.
Photo credit: INS Vikramaditya during trials.jpg, Indian Navy, published under the Government Open Data License - India (GODL).
Controlling the Heights: Great Power Competition in Nepal 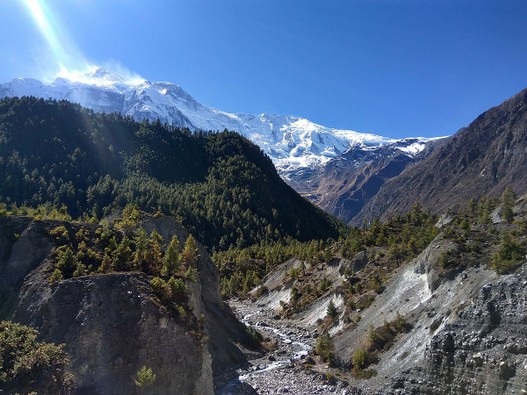 Nepal has firmly been into India's sphere of influence for decades.
However, in the current context of Sino-Indian competition, the electoral triumph of the left coalition and the subsequent reunification of the two main communist parties into a single governing political force are the signal of a shift in Nepal's foreign policy; which means the country will seek closer ties with the PRC to attract much-needed investments and to gain more autonomy from India.
But for New Delhi, this is a another negative geopolitical development, especially considering China's growing presence in its neighborhood.
Full article here (only for Geopolitical Monitor subscribers).
Photo credit: Silver mountain nepal.jpg, Awesomegagan, published under Creative Commons Attribution-Share Alike 4.0 International.
China-India Geopolitical Competition: First Maldives, Next Sri Lanka?

After exploring the international dimension of the polticial crisis in the Maldives, I returned in the Indian Ocean to examine the situation in Sri Lanka.
A state of emergency was declared on the island following attacks by members of the Sinhalese-Buddhist majority against the Moor-Muslim minority. Considering the country's history (notably the decade-long Tamil uprising), this is not a positive development, as it may lead to another ethno-religious conflict with destabilizing effects on the island and the Indian Ocean.
As a matter of fact, Sri Lanka holds a notable importance for both the major Asian powers, namely India and China. As in the Maldive's case, the former is concerned over the latter's increasing presence, thus making of the "Resplendent Island" another set for the ongoing Sino-Indian geopolitical competition.
Full article here (only for Geopolitical Monitor subscribers).
Photo credit: Indian Navy personnel salute from a naval ship.jpg, Indian Navy, published under the Government Open Data License - India (GODL).
New Delhi and Beijing’s Struggle for Influence over the Maldives 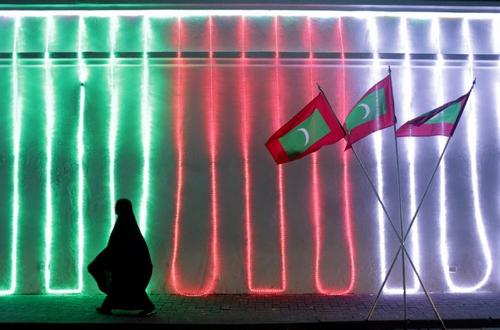 In this article I examine the Maldivian political crisis in February 2018.
The islands were shaken by a political turmoil following President's Yameen's decision to declare the state of emergency. While this event may at first seem a move in the context of a domestic struggle with the opposition, in reality the situation is more complex and involves a geopolitical competition between India and China in the region.
The article is available on both Eurasia Review (here) and Geopolitical Monitor (here).
Back to content